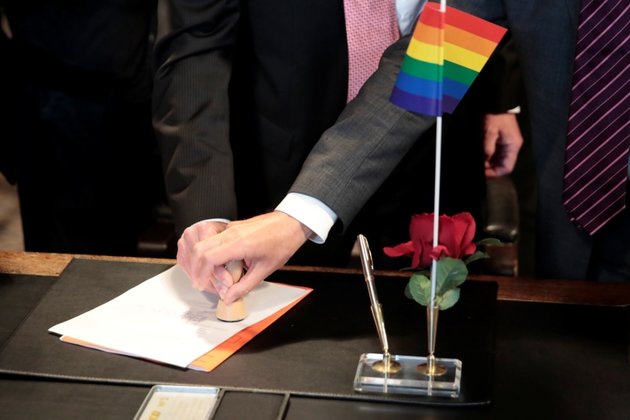 Two women have concluded the first same-sex civil union in Montenegrin history, more than a year after parliament passed a law making it the first non-EU country in the Balkans to allow such partnerships.

The individuals, who wished to remain anonymous, were wed in the Adriatic coastal city of Budva on July 25, according to local officials.

A Budva official, Milijana Vukotic Jelusic, said both women are originally from the Balkans but live and work abroad.

Questions of sexual preference and gender identity remain contentious in much of Montenegro and the region, where traditional Christian Orthodoxy and social conservatism hold considerable influence.

Montenegro's law on 'life partnership of same-sex persons' was passed by a mere two-vote majority a year ago. It gave the government until July 15 to bring Montenegrin legislation in line with the change to allow such legal unions.

The former ruling Democratic Party of Socialists (DPS) led the effort to pass the law on same-sex unions over the objections of some of its coalition allies. It has since been voted out of power.

The leading bloc in the current coalition government, the Democratic Front, opposed the legislation.

The Democratic Front-led government, which took over in December, has so far failed to harmonize or even send to parliament the required amendments to around 26 other laws and bylaws.

In Budva, Jelusic said the newly wed couple had requested their union on the day that the July 15 deadline ran out.

'Although the Law on Life Partnership of Same-Sex Persons was adopted a year ago, much remains to be done to meet all the preconditions for its full implementation,' Montenegrin Minister of Public Administration, Digital Society and Media Tamara Srzentic tweeted on July 25.

Srzentic pledged that 'the LGBTIQ community will always have a partner and ally in me for all activities that contribute to improving the quality of life of members of this community, as well as the promotion and protection of their rights and freedoms.'

Montenegro's first Gay Pride Parade was held in Budva in July 2013 in an atmosphere of violence. Attempts by angry crowds to attack participants were prevented by a heavy police presence.