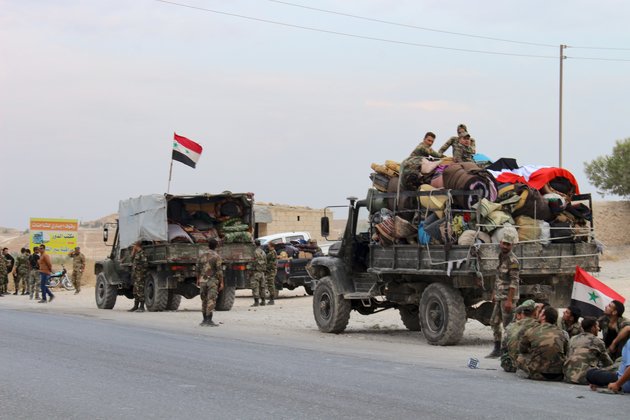 CEYLANPINAR, TURKEY - Syrian forces on Wednesday night rolled into the strategic border town of Kobani, blocking one path for the Turkish military to establish a ``safe zone'' free of Syrian Kurdish fighters along the frontier as part of its week-old offensive.

The seizure of Kobani by forces loyal to Syrian President Bashar Assad also pointed to a dramatic shift in northeastern Syria: The town was where the United States military and Kurdish fighters first united to defeat the Islamic State group four years ago and holds powerful symbolism for Syrian Kurds and their ambitions of self-rule.

The convoys of government forces drove into Kobani after dark, a resident said. The resident, who spoke on condition of anonymity for fear of reprisal, was one of the few remaining amid fears of a Turkish attack on the town. Syria's state-run media confirmed its troops entered the town.

Syria's presence in Kobani puts a firm limit on Turkish ambitions in its offensive. The town lies between a Turkish-controlled enclave farther west and smaller areas to the east that Turkey seized in the past week.

Turkey had talked of creating a 30-kilometer (19-mile) deep "safe zone," driving out Kurdish fighters from the border region. Turkish forces had shelled Kobani in recent days as part of the offensive but had not advanced ground troops on it.

The battle for Kobani turned the once-nondescript town into a centerpiece of the international campaign against IS, with TV cameras flocking to the Turkish side of the border to track the plumes of smoke rising from explosions in the besieged town. Then-U.S. Secretary of State John Kerry declared it would be "morally very difficult" not to help Kobani.

The IS extremists were finally driven out in early 2015 in their first major defeat, and an alliance was cemented that would eventually bring down the group's "caliphate" in Syria.

Now the Kurdish authority agreed to allow Damascus to deploy its military in the town and other parts of northeast Syria to protect them from Turkey's offensive launched after U.S. President Donald Trump pulled back American troops working with the Kurds.

On Wednesday, the U.S-led coalition said it had vacated a cement factory south of Kobani, which had served as a coordination center with the Kurdish-led forces. It also said its forces had left Raqqa, the former capital of the Islamic State that was liberated in 2017, and Tabqa, a town to the west.

After being effectively abandoned by the U.S., the Kurds turn to the Syrian government for protection has allowed Damascus' ally, Russia, to step in as the biggest power player.

Moscow further asserted that role Wednesday, offering to mediate a resolution to the conflict, one day before U.S. Vice President Mike Pence was to begin a mission to press Turkey for a cease-fire.

On Monday, Trump imposed limited economic sanctions on Turkey to raise the pressure on Ankara. The move came five days after Trump raised the specter of sanctions in a letter to Turkish President Recep Tayyip Erdogan, in which he also said that if the Turkish leader invaded Syria he would be remembered as a "devil."

Trump told Erdogan he wouldn't want to be responsible for "slaughtering thousands of people," and warned, "don't be a tough guy. Don't be a fool!"

Erdogan defied the sanctions, saying the only way its military offensive would end was if Syrian Kurdish fighters leave a designated border area.

Erdogan also said he had "no problem" accepting an invitation from Russian President Vladimir Putin to visit Russia soon to discuss Syria. But he threw into doubt a planned Nov. 13 meeting with Trump, citing anger over the sanctions that Washington imposed Monday on the NATO ally.

Despite an outcry among both Democratic and Republican lawmakers over the pullout and the Turkish invasion, Trump insisted a fight between Turkey and the Kurds was not a U.S. problem and that things are "very nicely under control" in northern Syria.

"Syria's friendly with the Kurds. The Kurds are very well-protected. Plus, they know how to fight. And, by the way, they're no angels," Trump told reporters at the White House while meeting with Italian President Sergio Mattarella.

Trump added that U.S. troops are "largely out" of the region, adding that if Russia wanted to get involved with Syria, "that's really up to them. It's not our border. We shouldn't be losing lives over it."

Still, the repercussions from America's abrupt withdrawal were expanding. Assad's forces are returning to regions of northern Syria they abandoned at the height of the 8-year-old civil war. Moscow has taken a more prominent role as an interlocutor among Assad, the former U.S.-allied Kurds and Turkey.

Erdogan's office confirmed the Turkish leader would meet Thursday with Pence and Secretary of State Mike Pompeo, and said he would travel to Sochi, Russia, for talks on Tuesday.

Erdogan said he was not concerned by the U.S. sanctions. He told reporters that chances for his November trip to Washington are "something to be assessed" after the talks with the American delegation, he said, adding that the sanctions and criticisms in the U.S. constituted "great disrespect toward the Turkish Republic."

In an address to his ruling party legislators, Erdogan said Turkey would not be coerced into halting its offensive or accepting offers for mediation with the Kurdish fighters, which Turkey considers to be terrorists.

"Our proposal is for the terrorists to lay down their arms, leave their equipment, destroy the traps they have created, and leave the safe zone we designated, as of tonight," Erdogan said. "If this is done, our Operation Peace Spring will end by itself.''

In a speech to Parliament, Turkish Foreign Minister Mevlut Cavusoglu said Turkey won't be affected by "sanctions and threats." He also said Turkey would "give the appropriate answer to these sanctions."

Turkish forces and Kurdish fighters also battled over the border town of Ras al-Ayn. Turkey said it had captured the town days ago, but its hold appeared uncertain.

Russian Foreign Minister Sergey Lavrov said in remarks carried by Russian news agencies that Moscow is committed to mediating between Syria and Turkey.

Russia already has announced it had deployed troops outside the flashpoint town of Manbij to keep apart the Syrian military and Turkish-led forces. Syrian forces took control of Manbij as U.S. troops completed their pullout from the town Tuesday.

Lavrov also said Moscow will also continue to encourage Syria's Kurds and government to seek rapprochement following the U.S. withdrawal. The Kurds are hoping to reach a deal with Damascus that preserves at least some degree of the autonomy they seized for themselves during the civil war.

Lavrov also blamed the U.S. and the West for undermining the Syrian state, saying this pushed "the Kurds toward separatism and confrontation with Arab tribes."

In another sign of Moscow's rising profile, France suggested it will also work more closely with Russia in Syria.French Foreign Minister Jean Yves Le Drian said told French TV channel BFM that France is now looking to Russia, given their "common interests" in defeating the Islamic State group in Syria.

A U.N. Security Council meeting concluded with no call for Turkey to end its military offensive against the Kurds. Instead, the diplomats issued a brief statement expressing concern about the dispersal of "terrorists" from the region and the humanitarian impact. 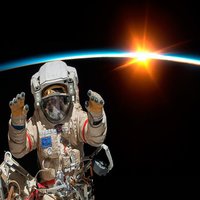 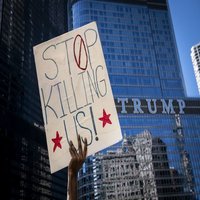 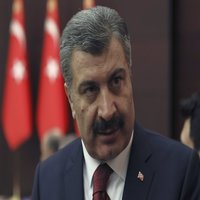 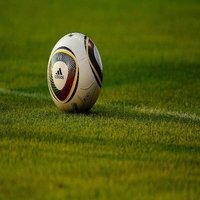 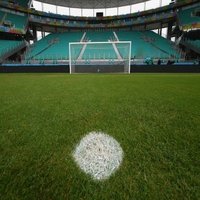 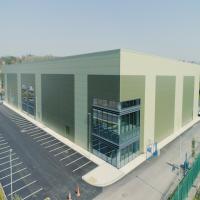 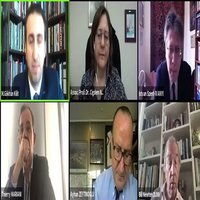 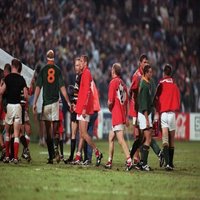 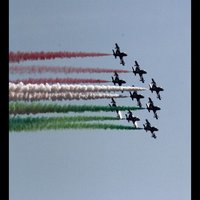 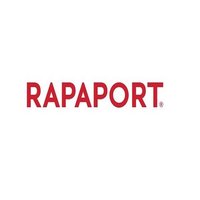